TRENTON – A measure sponsored by Senators Loretta Weinberg and Fred H. Madden which would revise current alimony and inheritance laws to ensure that persons found guilty of abuse, murder and other related crimes are unable to receive financial rewards got unanimous final legislative approval today by the Senate.

“To me it’s pretty simple – this bill would prevent these criminals from doing even further damage to their victims and their families by requiring them to pay alimony or inheritance payments,” said Senator Weinberg, D-Bergen. “This legislation would amend current laws that might otherwise entitle these criminals to these monetary benefits, and ensure that such undeserving persons are not rewarded for their actions.”

“There are certain things that are completely unacceptable, and expecting to receive alimony or an inheritance benefit from a spouse, after you have threatened, or in some cases taken, his or her life is unconscionable,” said Senator Madden, D-Camden and Gloucester. “This legislation would clear up any misconceptions or confusion about the awarding of these benefit payments.”

The Senators’ bill, S-1645/1640, would regulate the awarding of alimony and inheritance benefit payments.

The Senators noted that this legislation is a result of a situation involving one of Senator Weinberg’s constituents, Christopher Calbi, who gained national attention after a New Jersey court ruled that he’d have to pay alimony to his ex-wife upon her release from prison for killing their son.

The bill is broken up into two sections. With regard to alimony payments, the bill would prevent anyone convicted of an attempted murder from receiving alimony from their intended victim. Intended victims/spouses would also not be responsible for covering the cost of divorce court fees. Under current law, the divorcing spouse must cover the cost of the other person’s counsel fees.

The bill would also eliminate a parent’s right to inherit from their deceased child’s estate if they were found guilty of refusal to acknowledge/abandonment, sexual assault, endangering the welfare of that child or attempted murder.

The Senators noted that this bill is also the result of a recent New Jersey Appellate Decision, which ruled that a mother of an abused, abandoned child was not entitled to inherit the $1 million inheritance paid by the State to her son’s estate. The court ruled that awarding the mother the money would be “cruel, ironic and inequitable,” since that abuse and neglect contributed to the child’s death. 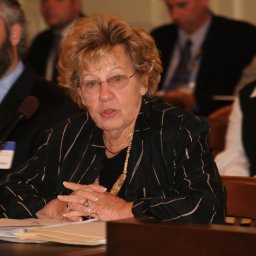 TRENTON – A measure sponsored by Senators Loretta Weinberg and Fred H. Madden which revises New Jersey’s alimony and inheritance laws to ensure that persons found guilty of abuse, murder and other related crimes are unable to receive financial rewards has been signed into law.

“This law corrects several major injustices that have occurred over the past years,” said Senator Weinberg, D-Bergen. “It is incomprehensible that one should have to pay alimony to a spouse who murdered their child, or give up half of their property to a wife who hired a hit man to kill them. Although, the courts were following the law, I wish I’d never had to sponsor and pass this bill.”

“The notion that a person can physically harm or even take the life of a spouse, and then expect to receive alimony or an inheritance payment is completely unconscionable,” said Senator Madden, D-Camden and Gloucester. “This law will send a crystal clear message that New Jersey will no longer allow these criminals to use the legal system to do even further harm to victims and their families.”