TRENTON – A bill sponsored by Senator Ellen Karcher to create a statewide Office of the Environmental Prosecutor in order to pursue legal action against criminals who violate environmental laws in New Jersey was unanimously approved today by the Senate Budget and Appropriations Committee today.

“In the light of the tight fiscal conditions facing New Jersey, we need to have watchdogs in place to ensure that State investments are producing the most for their money,” said Senator Karcher, D-Monmouth and Mercer. “The Office of the Environmental Prosecutor, which would largely be a restructuring of the Environmental Law Enforcement unit under the Attorney General, is a lateral move that would put greater emphasis on criminal prosecution of polluters in the Garden State. It would provide key oversight to make sure that polluters cannot undo all the positive environmental work we’re doing on the State level, and would require them to be responsible when they do damage our environment.”

“Given the damage to the Delaware River by a ruptured oil tanker recently, this bill is all the more important,” said Senator Karcher. “While I have no reason to believe that all parties won’t act responsibly at the end of the day in terms of cleaning up the Delaware, in the event of a protracted legal battle, New Jersey needs the resources and expertise that an Environmental Prosecutor would afford the Garden State.”

Senator Karcher noted that the concept of a special Environmental Prosecutor is not new to New Jersey. Governor Jim Florio created the position in 1990 by executive order to centralize responsibility for the coordination of the State’s criminal, civil and administrative enforcement of high-priority environmental cases, but Governor Christie Whitman abolished the office in 1994, claiming that it was not an efficient use of resources.

“The Environmental Prosecutor model has worked for the State in the past in terms of keeping New Jersey’s businesses environmentally honest, and I think it will be a useful tool to have in place for the future” said Senator Karcher. “This year, we’ve celebrated some major victories for the environment, such as the Highlands Preservation Act, but without strong oversight, we cannot guarantee the protection of New Jersey’s ecosystem. A strong Environmental Prosecutor will serve as a deterrent to those who would defile all the great things we’ve done on behalf of the environment in the Garden State.”

EDISON – Senator Barbara Buono today said the Cleveland school shooting is another tragic example why New Jersey needs to implement her proposed “Safe Schools and Communities Violence Prevention and Response Plan Act,” as a comprehensive, pro-active strategy to avert mayhem in our schools.

“Eight years after the mass murder of the Columbine students, we are faced with yet another school shooting committed by a troubled boy from Cleveland,” said Senator Buono, D-Middlesex. “Unless we begin to address the root causes that drive individuals to commit violent acts, no amount of metal detectors, security guards or cameras will prevent such homicidal behavior.” 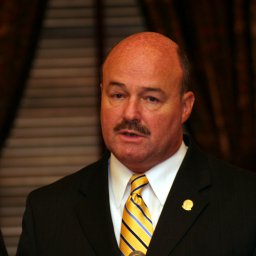 �In the event of an accident, an unsecured wheelchair could be thrown forward through a windshield, seriously injuring its occupant, other passengers in that car, and others nearby,� said Senator Madden, D-Camden and Gloucester. �Requiring that wheelchair-bound passengers be secured would help to prevent these types of accidents and increase safety for everyone who uses New Jersey�s roadways.�

TRENTON – A measure sponsored by Senators Fred H. Madden and Paul Sarlo, which would require wheelchair-bound riders in passenger vehicles to be secured using a wheelchair securement device has been signed into law by Governor Corzine.

“In an accident, an unsecured wheelchair could be thrown forward through a windshield, seriously injuring its occupant, other passengers in the car, and others nearby,” said Senator Madden, D-Camden and Gloucester, who serves as Vice Chair of the Senate Transportation Committee. “By requiring these wheelchair-bound passengers to be secured while riding, we can help to prevent these types of accidents and increase safety on our roadways.”