TRENTON – A measure sponsored by Senator Fred H. Madden that would ban the sale of “yo-yo waterballs,” which have been blamed for the strangulation deaths of hundreds of children in the United States was approved today by the Senate Commerce Committee.

“According to Consumer Product Safety Commission reports, parents have reported more than 375 injuries due to these ‘waterballs’, and 263 of them have involved suffocation due to strangulation,” said Senator Madden, D-Camden and Gloucester. “These toys are clearly dangerous and should be banned. The safety of our children must be our top priority,” said Senator Madden.

Senator Madden’s measure, S-1839, would ban the sale of “yo-yo waterballs.” Under the bill, selling the yo-yo’s would constitute an unlawful practice under the Consumer Fraud Act, and retailers would be fined up to $20,000. The bill would also allow families of victims to sue retailers for damages.

The yo-yos are made of a rubbery substance with an elastic cord. Most often, children are injured by bouncing the balls and getting the cord wrapped around their necks. The toys are also filled with liquid, which contains toxic and flammable ingredients.

Some retailers like Toys R Us and Walgreens have discontinued the sale of the toys.

“Statistics have shown that New Jersey ranks fourth in the nation for injuries from these toys. They have been banned in Illinois, as well as in Canada and throughout Europe, because they are unsafe, and this bill will add New Jersey to the list of progressive places who put the safety of children first,” said Senator Madden.

This measure now heads to the full Senate for a vote. 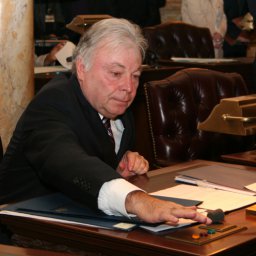 Legislation Senators Jim Beach and Donald Norcross sponsored to allow for the paperless submission of emergency operation and evacuation plans to state officials was released yesterday by a Senate committee.

“To the degree that we can make it easier for state emergency management officials to receive, review and archive crisis plans in a timely fashion, the better,” said Beach (D-Camden). “And to the degree that we can save local governments and school boards the costs of printing and mailing plans that can be sent electronically, the better, as well.”